My choice for the Appropriation Show and Tell was the music video made by currently deactivated YouTube account TopperMusic15, in which they too snippets of pop music videos created by famous artists and combined them all together into one singular piece.

The appropriation in this piece is obvious, the scattered and broken up parts of songs by artists like Taylor Swift, Ed Sheeran, Fifth Harmony, Nick Jonas, Selena Gomez, and many others. The fragments of songs are picked apart and then sewn back together into a new song. It doesn’t make too much sense, lyric-wise, because it’s a Frankensteinian mashup, but the sound flows well between snippets and the video fits the song it came from, unless an action is being performed in the video clip that extends past the end of the sound.

This song is entirely appropriated from other sources and it is the best example of it’s kind that I have found.

I chose to talk about Richard Prince’s 1989 ‘rephotograph’ of a Marlboro advertisement. Prince’s photograph was named one of Times 100 most influential photos of all time, and sold for 1.2 million dollars at auction, but the authorship of the photograph is debatable. The photograph was legally determined to be fair use, with Prince transforming the photograph and the meaning behind it through purely subtractive means. Despite this many people, especially photographers, see Prince as nothing but a thief, profiting off of other’s work and calling it his own.

While I believe Prince himself had questionable intentions, claiming he thought all advertisements were public domain when he took his photograph, I believe the photograph itself has an immense amount of value. Prince calls into question the idea of advertisements, the idolization of the masculine and mysterious cowboy, and the ownership of art, all by cropping an image most people wouldn’t think twice about when presented in its original context.

Prince has continued his adversarial challenging of fair use with numerous collages and the display of Instagram posts in a gallery setting. While many many people view Prince’s work as derivative and question the classification of it as art, I believe the questions Prince raises through his photography are extremely valuable. What is America? What do we idolize? How are we manipulated?  What is ownership? What is art?

Link to the slides

Basically, it’s been 400 years since a fully original sport was created. Crashed Ice is an extreme example of the constant appropriation in sports. No one owns a sport, so everyone can do whatever they want with it*

*If the sport requires a giant frozen obstacle course it might be the case that any company with the rights to the major leagues essentially owns the sport. (Looking at you Redbull)

I decided to talk about Scott Pilgrim because it represents one of my favorite forms of appropriation: use of fantasy elements as stand-ins for real-world issues.

None of us have actually engaged in an epic combo-punching video-game fistfight (though, if you have, I want to hear all about it). However, most of us have ended up in positions similar to Scott’s in this clip, in which our competition with a rival devolves into a no-holds-barred duel, at least in a metaphorical sense. Although the “rivals’ duel” trope does not actually apply to any of us, in its appropriated sense, as metaphor for interpersonal conflict, it applies to all of us.

Fantasy stories are often (and often correctly) accused of escapism. However, fantasy can also tell real stories, and in subtler ways than nonfiction. Scott Pilgrim is mostly fluff (though very stylish fluff), but  this sort of trope appropriation can be turned to more noble ends. Through the use of trope as metaphor, we can discuss issues that could be too difficult to address outright. The video game Celeste excellently uses the “evil twin” trope to discuss mental illness, for instance. I’ve even made a video game myself that puts the “chosen one” trope to work in an examination of anxiety. These narrative ideas have power, especially when their meanings are appropriated, examined, and, often, inverted.

The game I have chosen to present is the indie game Hyper Light Drifter, This game is made by the studio Heart Machine. It is a 2d top view platformer game. The Art style is pixelized style. What really caught my attention of the game is the ambiance, the music, and just the overall experience, it is something you must experience for yourself, for that reason being I will not talk about the story as it is best to play through it and experience it. Orwell is a simulation game where you play as a person working for the government that looks for and investigates national security threats. Aka spying on people in public.  Set in a country called the Nation, you have the ability to spy at people through surveillance cameras, and access to their private information through the government’s database. It’s a game that really makes you question the right to privacy, whether or not this surveillance is ethical.

I think that this piece can be related to many of the game examples discussed in class, as well as the reading about the radical political avant-garde. This game is very relatable to games like September 12th, where it criticises US military actions in the Iraq war by having a very unconventional gameplay, and the mod Quest for Bush, a game that reverses the role typically found in game, where the main enemy is George Bush. I definitely think there is a huge political aspect to the game Orwell. With issues such as privacy and surveillance these days, this game really fits well into these issues. It brings up questions about the ethics of surveillance. I think this is a great and important game that helps us learn, and gets us thinking about what is right and what is wrong.

This is a first-person puzzle-platform video game. It combined puzzle elements and future techniques.  It received critical acclaim, particular for its writing, pacing, and dark humor. The goal of this game is not killing, and it measured our exploring spirit and wisdom. Pursuing the new critical thinking way and creative thinking can help me obtain more enjoyable game experiences.

Kairo is a first-person atmospheric puzzle game, or what many would refer to as a “walking simulator.” All interaction with the world and the puzzles is done through manipulating the player’s position. The only things you can do in the game are walk, run, jump, and look around.

While the game never explicitly gives you a goal, the spaces and puzzles slowly guide you to set the machinery of the world into motion, unlocking new areas. At any time you can go explore the places you have already been; there are no one-way gates blocking you from going back, though there’s not much of a reason to do.

There is no text in the game, save for the menus and a few lines after the credits. All of the story is told through environmental details, visuals, and excellent sound design. The story slowly unfolds as you discover images and sculptures. There are plenty of hidden areas that lead to scenes that also help tell the story, but they are very, very difficult to find. They are only necessary for the secret ending.

The story is told non-linearly and starts in medias res. The story isn’t really about you, it’s about Kairo and what it does and why it exists. Who you are is relatively inconsequential to the plot; anyone could take your place and it would function the same. Because of all these factors, the story can be somewhat difficult to fully make out, though I thought it was clear enough to keep me motivated. Feel free to look up the plot once you finish, the creator of the game has confirmed that several analyses of the game’s plot were correct. 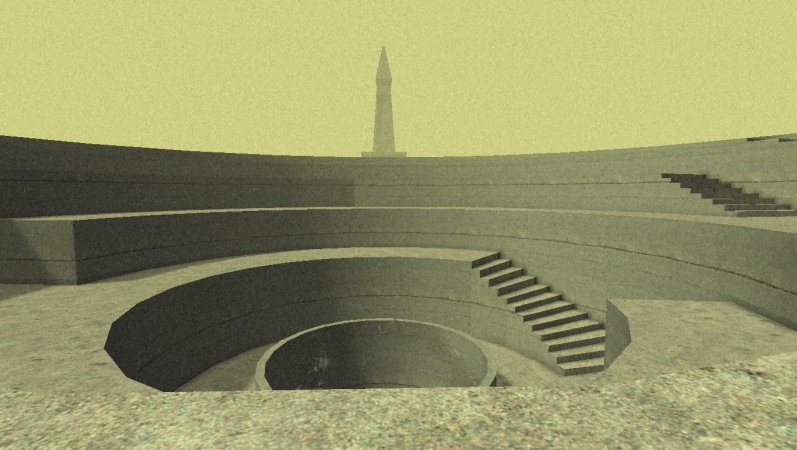 I really like Kairo, but it’s not for everyone. If you like walking simulators, you’ll probably enjoy it. The atmosphere of the game is incredible, with a unique visual style and a haunting soundtrack. If you don’t like games entirely based around atmosphere and exploring empty spaces, there’s not much to do in the game other than think and look at the cool architecture.

If I had to put this game on the Radical-Complicit/Political-Formal chart that Schrank uses organize the chapters in his book, I’d place it as Complicit and somewhere between Political and Formal. The game doesn’t really do anything radical, but the gameplay of walking around in Kairo alone leads to deeper meaning when placed in the context of the story that the game tries to tell. Combining these factors leaves me unsure of how to categorize it other than “somewhere in avant-garde.”

This article describes the game rather well: https://www.rockpapershotgun.com/2013/04/23/wot-i-think-kairo/